These have been interesting times for me over the last two weeks.  There has been a lot going on in pretty much every aspect of my life since the last trek to the Blue Ridge Parkway a couple of weeks ago.  Last weekend, there just wasn’t time to get out and do any photography.  This weekend, I had a little bit of time, but not too much.  The problem this weekend was the weather.  The forecast pretty much called for very little to no clouds for the good parts of the day.  The good parts are the ends at sunrise and sunset.  I was pretty much set on not going out to get any pictures this weekend, which was fine.  I still had a good many from the Parkway to handle my daily Instagram posts.

I did wake up around 5am on Saturday morning to check the weather since there was a chance of a decent sunrise in the Piedmont.  I wasn’t sure where I would go, but I wanted to be able to get out and do something if the weather looked promising.  The reports were pretty dismal though.  I saw no clouds, and the sunrise forecast had gone pretty blah overnight.  I turned the alarm off and went back to sleep.

When I finally woke up, I wasn’t even thinking about doing pictures.  Toni, Sierra, and I went out and visited the book store, went to a movie, and then had dinner.  All the while there were pretty nice clouds that developed in the sky.  Unfortunately, the sun was high in the sky, and while the clouds were nice, the lighting was harsh and flat.  Toni kept telling me to go and work on some pictures, but with the existing lighting I had no interest in shooting anything.  I was hoping that the clouds would hold out till sunset as they would look really good then.

When we got home after dinner I started to look at the weather forecast.  It wasn’t really looking promising for clouds, and the sky was fairly empty at this point.  The sunset forecast, however, gave me a little hope for some color in the sky.  It might not be much, but it was worth going out and trying.

Now I needed to come up with a location to go.  I have been trying to shoot a barn nearby for several months now, and I keep getting stymied by the sky at every turn.  I have been trying mostly in the morning for a sunrise behind the barn.  The idea has always been to get there long before the sun comes up and trying to capture some interesting colors in the sky, while still being able to expose for details in the barn.  Twice now I’ve tried that and failed.  I have also been out trying for some cloudy shots, but to no avail.  It has been about 4 years since I have successfully shot this barn, and I wanted to get it in the summer before the trees started to change, or shed their leaves.

I went ahead and set my course for the barn off of Union Cross Rd in Forsyth County.  My thought was I would probably get there and turn around, or sit for a while before deciding to give up.  I know, this is a terrible attitude to have, but honestly, I didn’t really feel like going out.  Had it not been for Toni prodding me, and my memory of many landscape photographers’ vlogs talking about going even when you don’t want to, I would have stayed home.  Even if I didn’t get anything, the weather was nice and it would be nice to get behind the camera for a short time if nothing else.

When I arrived, the lighting was actually pretty good on the barn with the setting sun lighting the face.  I went ahead and got the camera out and fitted my 70-200mm lens with the Sigh-Ray Color Combo Polarizer.  I actually stayed across the road to get the composition that I wanted.  Since there was not much interest in the sky, I wanted to minimize the amount of sky that I included in the shot.  I mainly wanted to get the barn, and the tree that stood next to it.  The plan here was to shoot a color image of the barn, but when I got home and looked at it, the colors were just lacking something.  I liked the lighting and composition though.  I decided to see how the sky would stand a monochrome conversion.

Once I got the conversion started, I could tell that the clouds were a little more visible, and the textures of the wood and crops stood out more.  I worked with the contrasts and tonal relationships until I was happy with the image.  It wasn’t what I had envisioned when I shot the scene, but it wasn’t bad either.  It was a good start to the evening.

The sun was dropping now, and the lighting was improving.  The clouds were also coming into play above the barn.  I flipped the camera on its side and framed up a shot that captured the barn, tree, and the clouds above.  I was really liking this composition.  However, when I was looking in the review after the exposure was made, I realized something.  In my excitement to set the shot up, I had missed a power line right at the top third point, which is why I missed it.  I lined up perfectly with the grid lines in my preview screen.  I was going to need to get to the other side of the road and shoot under the power line.

When I got there, I knew that the long lens was the wrong choice for my new location.  I quickly swapped out to my 24-70mm lens and swapped the Color Combo Polarizer over as well.  I recomposed and found roughly the same image at 35mm that I had found at 70mm earlier.  This is the power of lenses, I can get the same compositions from wildly different positions.  I was also able to get a bit more sky and foreground in this image with the perspective change.  I grabbed a few exposures as the clouds moved across the sky.

I continued to shoot different compositions as the sun faded to my rear.  I was a little disappointed to see the best cloud formation in the sky, and also the best lit one, was to the South.  There was nothing at all to put under that patch of sky except a line of trees and a power pole with a lot of power lines draping across the scene.  This just wouldn’t work at all.  Oh well, I had a nice barn to work with.

As the sun dropped out of sight to my rear, the colors started to change up significantly.  There were purples in the sky now, and the twilight sky was upon us.  I set up a few different shots, and exposed as close to the right of the histogram as possible without blowing the image out.  It looked terrible in the review image, but I knew that would be the case.  I needed it slightly overexposed so that I could keep the detail in the barn, and I could recover the sky detail easy enough in Lightroom.  I wasn’t sure how any of these would turn out, but I knew if they worked, I would have something entirely different from anything that I had shot before.

When I got home and started to process it, it took a minute or two to start seeing the colors develop that I had seen while shooting the image.  What would normally take 5-10 minutes, probably took about 15 minutes to process.  I really started to see the possibility of this one looking like what I had envisioned while shooting the image.  Yes, this one might be a little more “worked” than most of my images, but I felt that it deserved a little extra processing to be true to my vision.  It is not manipulated, and is not a composite.  It isn’t even an HDR image.  What it has turned into is a highly saturated image that has been dodged and burned to bring out the details that I found important to the image.  It is a true representation of the actual scene, and is spot on with how I interpreted the scene at the time.

Just as I was about to pack up the camera, I started looking for the moon which was full.  I knew it would be coming up very soon, and it should be near the barn.  If I was lucky, I would get the opportunity to shoot the mood with the barn composition I had set up.  Unfortunately, it was a bit far to the right for that to happen.  I did move my position and shoot the barn square from the front with the moon just to the right.  The composition was weak, and there was really no excitement in the image.  It turned out to be one that I left in the discard file.  I added my 2x teleconverter and tried for a moon shot at 400mm just because it was rather clear looking.  It turned out pretty good, but I have just never really cared for moon shots that aren’t a part of a complete composition.  It was just a moon, and it was no better, or any different, than any of the other hundred moon shots I have seen.  It fell to the discard pile as well.

At the end of the evening, I had shot 59 frames of this barn and the moon.  I knew I didn’t want my normal 10% cut to be keepers since this was just a single subject.  I was actually looking for one, maybe two images to keep.  In the end, I found that I really liked three images.  They were all quite different, and represented a different story of the barn.  I was happy keeping all three of the images and sharing them with you. 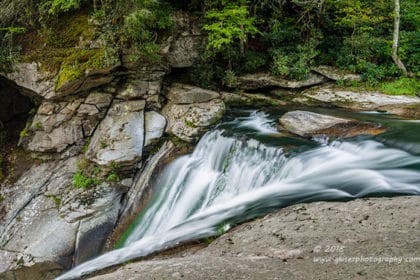 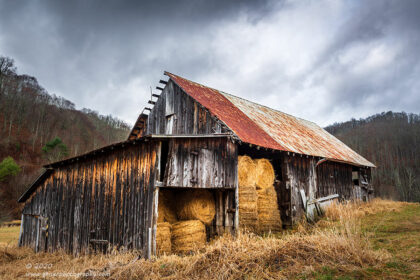 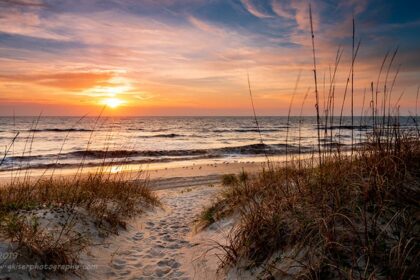